Brent and I are both members of the MCSA, and Brent this crazy idea – so I loved it! A weekend up at the hut just before Christmas with our partners who had never stayed in a mountain hut before – one had never even camped before.

“What do you mean there’s no power?

What do you mean there’s no internal running water, and no HOT water??

What do you mean the loo is outside half way up a hill?

Brent and I promised to look after Tilana and Tania. It had to be good, or it might be the end of any ‘outdoors’ relationships.

Thus it was a heavily laden party of four who struggled along the path to the hut carrying all sorts of luxuries to make sure the ladies had a nice time. Even so, we were a little worried as to how the girls would react.

The journey thus far had not been without excitement. It had begun with a wine tasting at Lourensford estate. I got the feeling that Brent and Tilana went there quite often as they were greeted with open arms, and the tasting samples were sooooo generous (hic!). We eventually tore ourselves away and slightly worse for wear, we went to check in at the Vergelegen estate gate.

Brent’s big 4×4 buckie took the humps with ease, but we almost didn’t make one sharp bend as Brent was busy looking up at the mountains. We shouted a hysterical warning and I was sure we were going over the edge into a ditch. Images of severe embarrassment – needing a tow out of the ditch flashed before my eyes, but Brent managed to wrench the wheel around as we teetered on the edge and drove on. At least for us, this corner is now called Brent’s Bend. 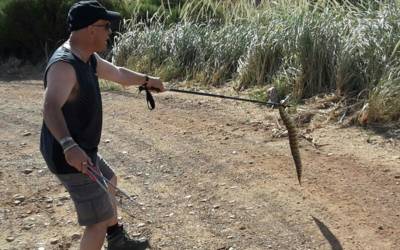 It is traditional to stop at what we call the snake trap. It is part of a sluice gate system that controls the water flow from a channel that is fed from further up the hillside. Snakes looking for water regularly get washed down and into the water containment tanks, and there is no way out for them. The estate regularly checks the tanks and any passing club member also routinely checks and lifts out any snakes with a long stick or a trekking pole, and sometimes, very carefully with braai tongs.
In many times of stopping at the traps I had never seen a snake there, but this was to be the start of a very special wildlife weekend.

To my surprise, there was a nice sized puff adder with its head just out of the water. 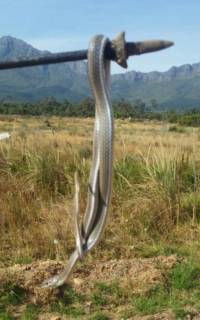 Brent used his pole to lift the snake out of the pit and laid it on the grass to warm up. We turned around to find another snake on the side of the pit. I lifted this snake away from the pit and back to the bush. It was a mildly venomous Whip Snake, which I lifted and dropped on the grass.Anyway, a start of excitement for the weekend. There couldn’t be anything else could there? 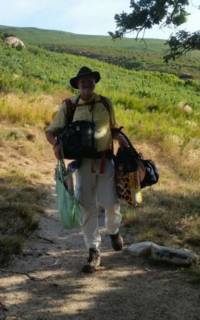 It was a slowish, overburdened hike to the hut, during which Tilana lost traction near the hut and slipped into a ditch (now called Tilana’s Tumble). Not good.Happily, we shed our loads and we showed the ladies the Loo with a View and the swimming hole. They were beginning to be impressed with the hut and the outstanding scenery, and we guys breathed easier.

When our mates are happy, life is much better.

We lowered four mattresses down from the loft and spread them out on the stoop, then got the inside fire going to heat up the lasagne. There followed a fine meal followed by good wine. We sat for a while under the stars. At least some of us did. Soon a gentle female snore could be heard from the stoop, whilst we sat looking up at the stars. We dissected South African politics and other weighty world issues before I too baled and laid out with my 1.9m frame overhanging the stoop edge. Sleep came easy!

Sunset. Got to be one of the best loo views in the world

Sometime in the wee small hours I sensed something furry pushing against my overhanging feet. I must have been dreaming, right?

Saturday was heralded by the rising sun subduing the dark as slowly the orange orb crept up and over the mountains behind us, and then shone down in early shades of pink on the flanks of the Dome and West Peak……very cool.

Over a breakfast of bacon, eggs and croissants with butter we asked the ladies what they would like to do. Tilana opted to relax at camp, whilst Tania was interested in seeing the cave paintings in Sneeukop gorge. It was going to be a hot one, so we set off immediately so as to beat the heat of the midday sun.

We hauled ourselves up that steep slope to the Lourensford Estate tracks, and set off along the rough roadway heading for the gorge. I have an insatiable curiosity regarding the outdoors, and as Brent is an experienced geologist I quizzed him about any passing rock and intrusion, the slopes of the scree, and the possible depth of the various areas of talus. Brent, also an enthusiast, happily fed me his knowledge which I added to mine.

We were still chatting rocks and all things earthy when we stopped for some reason just short of Sneeukop Gorge. It was just about 100m back from the main gorge where a concrete pipe conducts a small side stream under the track. Brent was espousing a point of rock when Tania asked us to stop talking and listen. We were well into out discussion when Tania insisted we STOP TALKING. As we did she pointed up the wooded slope and gave a muffled scream. 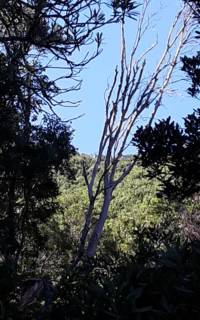 Tree shaken by the Leopard

About eight metres away, she had seen a leopard’s body and its tail. I looked up and saw its flank moving right to left through a gap in the woodland. Tania spun on her heels and was about to run, when we tried to persuade her to stay calm and stay with us.

There was a large crash as something heavy went up the side gorge, then the leopard jumped up on the base of a dead white tree and shook it.

There was further noise as it went further up and into another large tree where Brent made out the head and upper body.

Whilst Brent and I knew that an attack on a human was extremely unlikely, and almost unheard of, Tania did not. She remained convinced that it would jump on us, and was very keen to get away. I struggled with the need to calm Tania and get my phone camera out at the same time.

The strange thing was why would a normally very shy animal put up this display of bravado? Because of that, even Brent and I were slightly unnerved by its actions.

The moment had past. The Leopard had jumped down and disappeared, and I had not taken a single pic. I still curse myself!

We decided not to disturb it further, to which Tania readily agreed, so we made our way back down the track, giving up plans to visit the red daub paintings.

As we made our way back down the trail, we came across some tracks of what we thought could be the prints of a Leopard with a set a smaller pug marks with them. Hmmm, mother and cub? Maybe. That would go some way to explaining why the Leopard we saw behaved so unusually aggressive.

We realised the encounter was unusual, thus I have tried to describe it just as it happened. So perhaps someone with more Cape Leopard knowledge might confirm or deny our thinking. 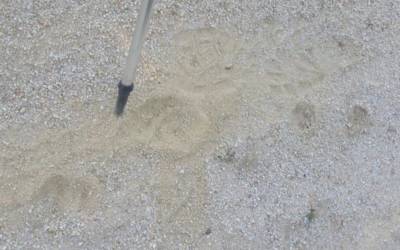 Tracks of a female and cub? 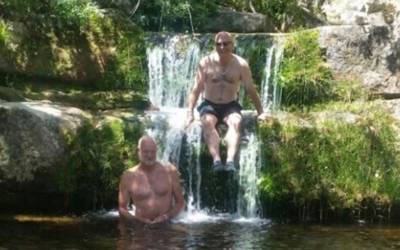 Once back at the hut, we could begin the serious business of ‘chillin’ in the pool.For a mountain stream the water was warm and delightful, and the falls were great to sit under.

We made a braai that night, with a fine salad to have with the top-class woollies burgers. There are some advantages to staying in a mountain hut with women! 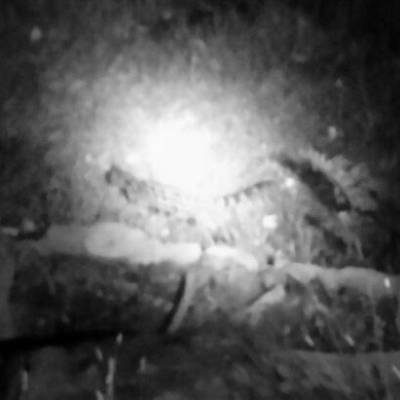 Poor picture of our Gannet

We moved outside to sit under the stars and drink some more wine, beer or cider, as we felt like. Then Brent gave a shout. A smallish mammal was moving about below the hut stoop wall. It had a body size a little bigger than a cat, with short legs and a long ringed tail. It goes under the cumbersome and unromantic name of Lesser Spotted Gennet. We watched it dart about looking for food, almost completely oblivious to us, and I would say well used to hut visitors. Later when we were laid out in our sleeping bags on the stoop, the partner appeared and one of them brushed against the bottom of Tania’s sleeping bag. So, I hadn’t been dreaming after all when last night I felt something furry brush against my feet. 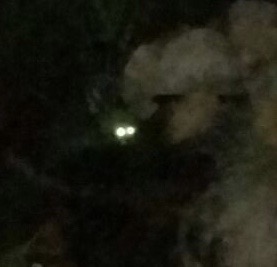 Gennet’s eyes glow from the dark

Sunday morning saw Brent and I heading back for Sneeukop Gorge. We wanted to see if we could find out any more about our Leopard sighting the day before. Leopards with cubs tend to have more than one den, and when disturbed they usually pick up the cub\s by the scruff of the neck and take them off to another lair. So we did not really expect to be lucky enough to have another sighting. Never the less, we approached the sight with care. 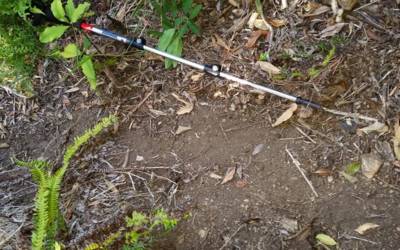 With difficulty, we scrambled through a thorny barrier barring the small ravine, and came across a section of trail that had been used so many times that it was worn into a virtual path.

We checked the trees for signs of claw marks, but were not able to substantiate what we saw as definite claw marks.

The area was littered with boulders that would be fine den sites. Later, we found a worn animal track leading onto the estate track.

Once back at the hut we found the ladies had pretty much sorted all the bags ready for carrying out. We did a final check and staggered out with our belongings, including a big bag of rubbish.

Last stop was a final check of the water snake trap. We had pulled one out two days before so surely there wouldn’t be another one? Well, it wasn’t one – rather two!

My turn, so I lifted out a very large, beautifully coloured Puff Adder and placed it on the grass verge to warm up. Then I lifted out the darkly coloured, only slightly smaller of the two. 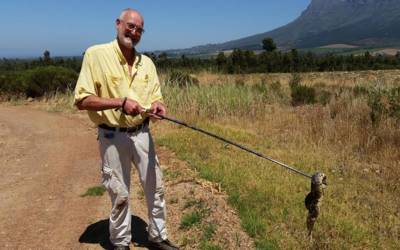 Thankfully they were not aggressive, and allowed us to move them to the far side of the road. In truth I have to say that they were both in a torpid state due to being in a cool water trap for some time. All very exciting nonetheless!We left our two Puff Adders sunning themselves back to life as we drove back to Somerset West.

Best of all – the ladies had a great time and want to go back – yessss, there is a benevolent god. Thank you!

Many thanks to the Hottentots-Holland section of the MCSA for the use of the hut. 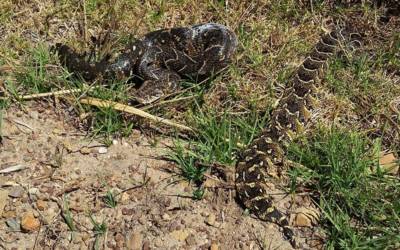 Our Puff Adders warming up 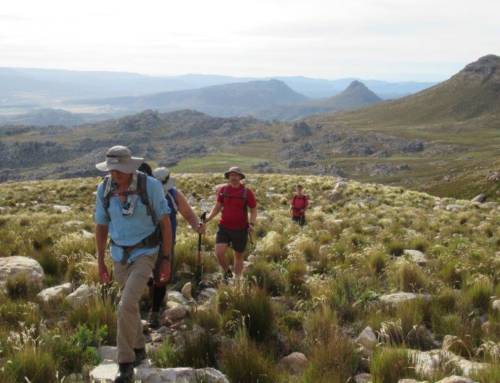 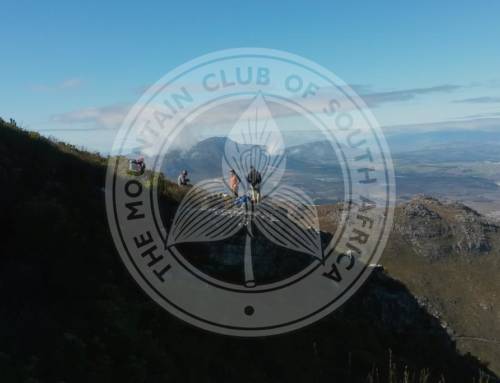 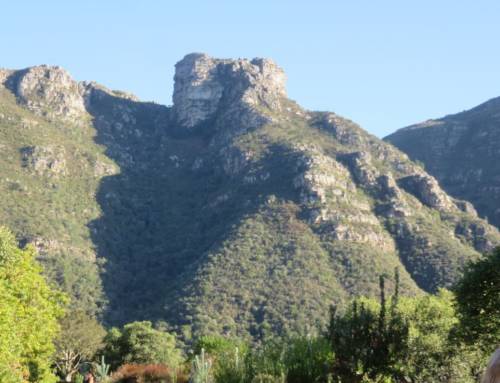 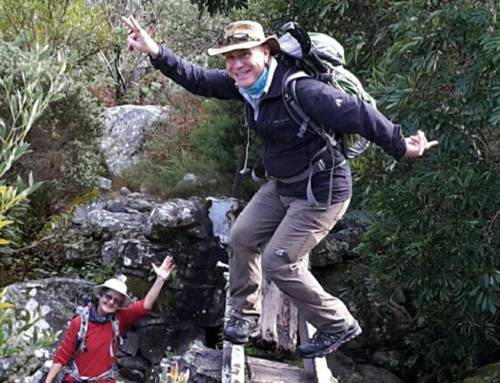 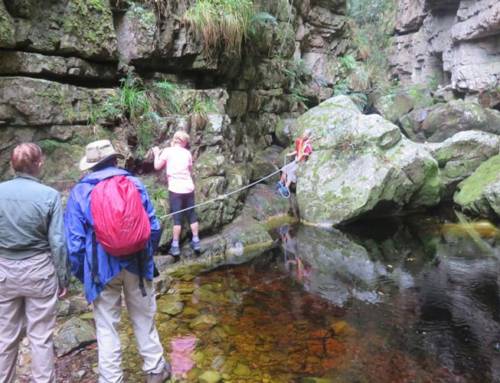