Finally, on the fourth attempt I succeeded in reaching the top of both peaks.

1. Approached from the Waaihoek Mountains side(West), sleeping over at Hoare Hut, then attempting “the ridge” to Mostertshoek. Even getting to the ridge from Hoare Hut was a challenge. At about a third of the way across, we realized we did not have a hope in hell at our snail’s pace of making it, and we turned back.(2017?)

2. Approached from the Mitchell’s Pass side. Had an after-the-fact hand-drawn route from a fellow mountaineer and some vague from-memory descriptions, and a dire warning of water problems. Tried to get onto the “step” that head diagonally up towards the South, and terminates in a ascent valley, next to a stream. Unfortunately, spent too much arsing around getting onto the ‘step’ from Big Sky cottages direct. Camped too low ~900m, then only made it to 1800m on the lower of the twins the next day. In retrospect, we were too far North on the lower twin any case. At least we noted a good base camp level area at 1500m, at the top end of the ascent valley with water relatively close by. (2018??)

3. Again from the Mitchell’s Pass side. This time slightly better organized. Drove up on the cement road and parked at Stone Farm cottage. ( gained 300m for free ) Hiked up easily to base camp location at 1500m. Next made the summit of the lower twin, but too little daylight and the mood was not focused. The route down the first twin to the saddle, then up the main twin looked daunting. Scouting around a bit and looked by longing at the main summit. So close and so far. ( June 2019)

And now, the saga of the 4th attempt. Bonus number one; we had a GPS track of the route across the saddle between the peaks. Bonus number two; we were fitter, lighter(in all respects) and more experienced. This was becoming familiar territory after all. With a good weather forecast, and flowing water visible from the road ( there is a waterfall visible that run directly off the ascent valley ) we set off from Olive Stone cottage where the car was parked, and slogged up the cement road. In general, we had been lucky in 2019, and the years before, as the mountain had burned in 2018?, thinning the under brush considerably, making path finding easier and foot placement secure. This time though, it was a constant push through vegetation and detouring around impassable thorny patches, and we only reached base camp a little after sunset. This was the same base camp we had used in 2019, flat with water nearby. Next day we set off following the same route as previous up the lower twin, on a north-East approach, and made the lower twin summit in about 2-3 hours. 1959m. Then the much anticipated new route started across to the main twin.

My guide for this section is as follows;

From the lower twin summit follow the crest towards the saddle until you are almost level with the saddle, at least it feels like it. There are some cairns, but not a continuous line-of-sight cairn path. Just enough to give you a fuzzy feeling now and then. This crest route will involve some scrambles, but never with severe exposure, and only minor rock climbing skills. Its more about picking the right line than technical skill, so I guess experience here is a must.

Then down to the saddle (marked by a cairn), slightly more challenging than the crest route, down-climbing along chutes to reach the saddle. Pick the chutes that look the least challenging.

Proceed up onto the main twin. And, gloriously surprising, it looks way more daunting from a far than what it actually is. The reason being that there is a upward sloping, broad ledge that curves around the North-West of the main twin for quite a way and one can proceed relatively quickly. When the ledge ends, zigzag slightly higher a few meters to find another ledge heading with the same bearing as the first. And so on. Again there are some welcome cairns serving as a reassurance more than a clearly demarcated path. All in all, keeping heading up obliquely in a Southerly direction, making your way around the mountain. Suddenly the summit beacon appears on your right, and a comparative gentle stroll brings you to the top.

For me, it was a bit of an anti-climax. BY no means do I want to distract from the vistas and sense of achievement. Let me explain. Hagen and myself had started the day with trepidation. We both had packed extra gear in the summit pack in case we had to spend the night out. At the very least, I had expected us to return to base camp with headlamps on. So, suffice to say, I was still waiting for it to get worse, when we made the summit.

We met a trail running couple at the summit. They had approached from the ridge side, overnighting at Pell’s hut, and arrived at the summit a few minutes before us. We had a good chuckle at the chance meet on this hard to get to summit.

Going back was as always a slog. One still had to keep focused crossing one twin to the next, remembering the way from an hour before. Eventually we made it back to base camp without incident.

The next day we walked down to the parked vehicle.

Retrospection: I am glad I don’t have to go back there – 3 times I had to turn around and that was surely enough. I had a swim in a rock pool on the way down, and then, looked up at the mountain, thanked it, and turned away with relief. 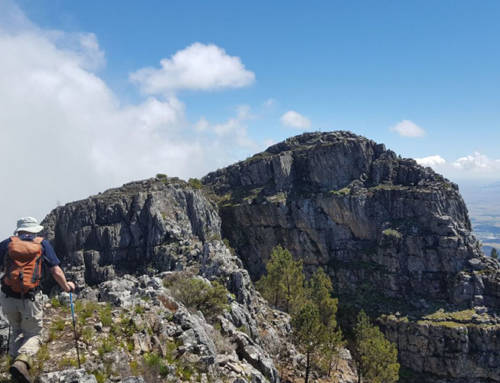 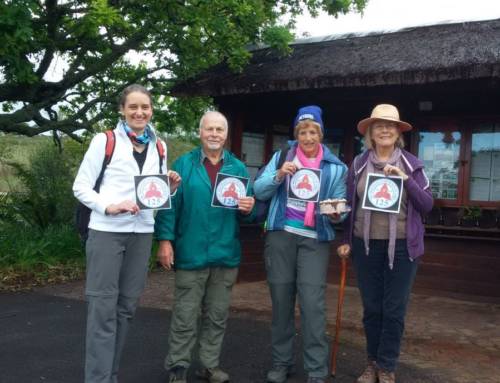 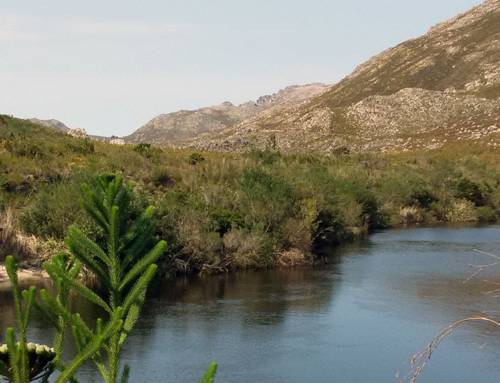